What YOU need to know about Fake Krugerrands

Caveat Emptor! What YOU need to know about Fake Krugerrands:

Krugerrands have been in the media for all the wrong reasons. Last week US customs officials intercepted 119 fake Krugerrands at the Rochester Port of Entry in New York State.

Subsequent news headlines might have sent shivers down the spines of those who hold Krugerrands.

The Krugerrand set the global standard for collectable and investment gold coins. Since 1967 many other countries have taken their cue from South Africa and have produced their equivalents.

The South African 1oz Gold Krugerrand is the worlds most recognised and trusted bullion coin. The Krugerrand was the original 1oz gold bullion coin, first minted in 1967. We have been buying and selling Krugerrands and other gold coins and collectables since 1972 and have seen the Krugerrand franchise retain its popularity. Krugerrands have been supported by its early uptake, worldwide promotion and recognition. The Krugerrand set the global standard for collectable and investment gold coins. Since 1967 many other countries have taken their cue from South Africa and have produced their equivalents. For example, the Canadian Maple Leaf, the American Eagle, the Gold Panda of China and the British Gold Britannia. These examples are based on the South African Krugerrand model, and none are exempt from potential fraud.

A survey conducted by the American regulatory agency, the Anti-Counterfeiting Task Force (ACTF), reveals that the popular U.S. bullion coin, the American Eagle, is the leader in a category their manufacturer would rather not be in – the most frequently encountered bullion coin counterfeits. We know that counterfeiters — primarily from China — target the most popular products, usually market leaders with the highest brand identification.

Al Pacino once said, “Our ability to manufacture fraud now exceeds our ability to detect it.” So while we agree that coin fraud is a reality, we know that we can manage and easily detect counterfeits. Customers need to empower themselves so that they can identify a fake coin.

The first step in this process is to deal only with a reputable expert- ideally a coin dealer specialising in Krugerrands. We use a robust quality testing procedure to apply The Fisch Gauge and Ringer - these are precision instruments designed to check vital specifications. The Fisch is used globally by banks, bullion dealers and coin collectors. Even mints, such as The United States Mint and The Royal Canadian Mint, turn to The Fisch spot fake coins.

So why is The Fisch the most critical weapon in the arsenal against fake Krugerrands? This professional instrument checks the weight, diameter, thickness and shape of a gold coin. These four checks will detect all common metal counterfeits. The fake coins confiscated in New York were made of low-quality metal. The Fisch would have quickly picked that up right away - especially The Ringer test, which picks up common metal counterfeits.

It’s unlikely that the fake coins in New York are a single rogue batch. There could be more forgeries out there. So It is vital to learn what a genuine Krugerrand looks and sounds like. Our professional brokers can demonstrate The Fisch Gauge and Ringer to buyers and sellers. Our Executive Chair, Alan Demby, was interviewed by Bruce Whitfield on Radio702 and said, “We do not believe that fake Krugerrands are endemic, but we know “ if it's too good to be true, it generally is.”

Alan Greenspan, who served five terms as the Chair of the Federal Reserve of the United States, said that “Corruption, embezzlement, fraud, these are all characteristics which exist everywhere. It is regrettably the way human nature functions, whether we like it or not.”

Sensible sentiments indeed. When you think you're getting a great deal, you're probably not—Caveat Emptor. 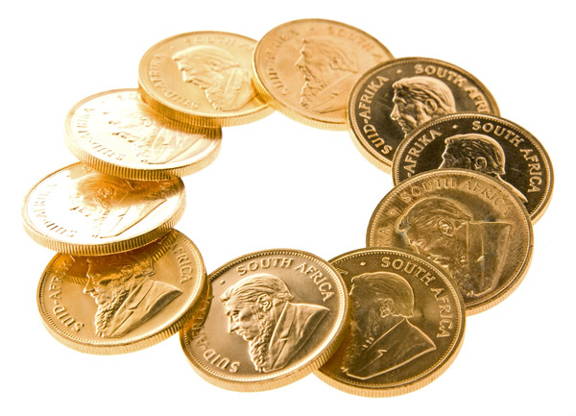