"The time is always right to do what is right."
-Martin Luther King Jr.

Today is Martin Luther King Day ( MLK Day ). The United States and the world celebrates MLK’s life and achievements on the third Monday of January. Today we remember King, the influential civil rights leader — best known for his work on racial equality and ending racial segregation in the United States. Under his leadership, Black Americans gained access to education and employment that had long been denied them. King is a legendary figure in civil rights history, and his powerful speeches mark him as one of the best orators of all time.

Coin enthusiasts will be interested to learn that MLK has been the recipient of many numismatic honours.

In 1964, the Nobel Peace Prize was awarded to MLK for his work in civil rights and social justice. This was just a year after his famed “I Have a Dream Speech” that he gave in front of 250,000 people at the Lincoln Memorial. It was also the same year that the Civil Rights Act was passed. The medal is solid gold and features a portrait of Dr. Alfred Nobel on the obverse and an image of three men embracing on the reverse.

Forty years after the passing of the Civil Rights Act, MLK was honoured again. In 2004, US President George W. Bush signed legislation to award Martin Luther King, Jr. and his wife, Coretta Scott King, the Congressional Gold Medal. This solid gold medal features a portrait of Rev. King and his wife on the obverse and includes an MLK quotation on the reverse.

In honour of the 50th anniversary of the passage of the Civil Rights Act, a commemorative silver dollar was issued. Though the coin doesn’t depict Rev. King himself, it does feature the protestors who marched on Washington to see him speak. The reverse side shows a flame burning strongly.

The Mint of Norway only struck 52 of this commemorative coin, making it a true collector’s item. The distinct design and historic significance of Martin Luther King Jr’s legacy set up the Martin Luther King Jr. 1oz Gold Coin as a rare and desirable addition to any numismatic collection. 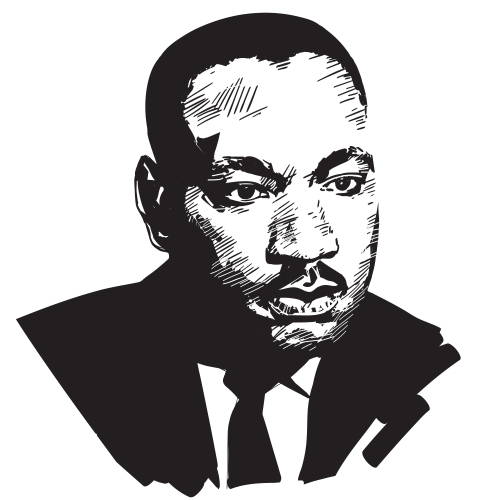