Time to amp up your coin collection

It’s Rocktober, and we are celebrating the Fender Electric Instrument Manufacturing Company, or "Fender" for short.

The story of the world-famous Fender company began with Leo Fender, who was a general radio repairman. An inventor at heart, Leo soon found a knack for tinkering with friends’ defective amplifiers. One thing led to another, and Fender began making amplifiers and thinking about a new and improved guitar that would be louder and more acoustically versatile than its competitors. Innovation ushered in the era of the Telecaster, Esquire, Precision Bass and the legendary Stratocaster.

The Fender® brand is considered one of the best in the music industry, and these fantastic coins pay tribute to this globally recognised trademark. Fender® guitars have been used by musicians worldwide, transforming music in every major genre, including country and western, jazz, rhythm and blues and the most popular - rock ’n’ roll.

“Fender® has become a cultural icon in its own right and champions all music lovers, from young guitarists just learning to play to legendary musicians. We are thrilled to be able to offer numismatic collectors and music enthusiasts the opportunity to own a one-of-a-kind Fender®,”

Join the ranks of music legends George Harrison, Bruce Springsteen, Keith Richards, and Eric Clapton by adding a Fender Stratocaster or Fender Guitar pick to your coin collection! Both of these coins have collector appeal and a limited mintage of 2500.

Have you got rhythm? Let your guitar skills shine by entering our competition.

Click here to learn more about these coins and others featured in our Rocktober celebration and how to enter our competition. 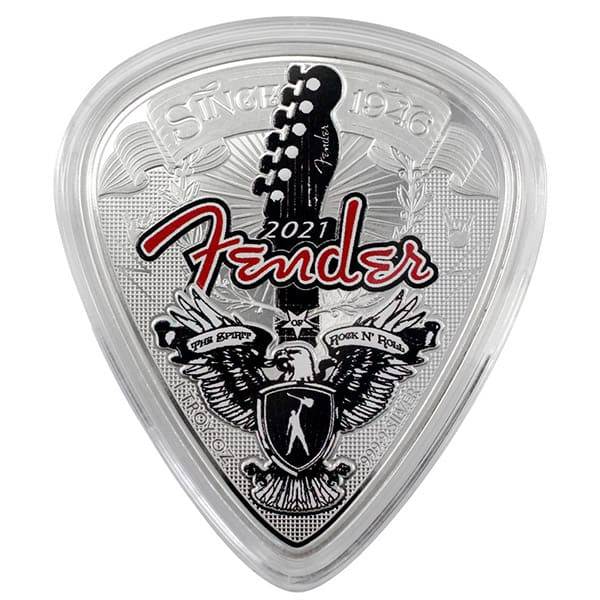