Growth of blockchain technology catapults digital assets into the mainstream

Growth of blockchain technology catapults digital assets into the mainstream

Though non-fungible tokens (NFTs) have been around since 2014, 2021 was the year this novel technology broke through conventions, disrupting the world of collecting. Over the past 12 months, the NFT scene has evolved rapidly. And now there is a real, audited, insured NFT.

The South African Gold Coin Exchange (SAGCE) & The Scoin Shop has over 45 years of experience bringing gold coins and collectables to South Africa. We have forged exclusive relationships with the world’s most prestigious mints, established traditional retail shops, developed an e-commerce site, introduced a cryptocurrency payment option, and recognised the value of Troygold. SAGCE & The Scoin Shop is always chasing innovation. We continue to reshape the industry by listening to our clients, anticipating their needs, redefining opportunities and ensuring that gold is for everyone.

We have always embraced the future and are responding to the next frontier: NFT assets. This ZAR coin collection NFT is unique because it is backed by one of the most highly graded, sought-after coin sets South Africa has ever produced. This is not a picture of a rock or a mutant ape; this is real, audited and insured.

Our pioneering partnership with Momint demonstrates how the blockchain is revolutionising asset ownership. Once only the domain of the wealthiest numismatists (coin specialists), this tokenisation will enable fractionalised ownership of this priceless collection, lowering the entry point for enthusiastic collectors to a price as low as $200.

Momint, a South African Web 3.0 tech firm, has tokenised an exclusive complete denomination coin proof set of the old Zuid-Afrikaansche Republiek (ZAR) coinage for the digital era. Collectively known as the original Krugerrands, the coins occupy a unique place in South African history and have only grown in legend and value. Now a new generation of collectors can get their hands on a piece of this iconic collectable set.

To ensure the accessibility of the collection, the Momint marketplace supports the purchase of NFTs using a credit card and generates a crypto wallet for each user. No prior crypto or blockchain experience is required to purchase a Scoin token.

Since the ZAR-era coins were first minted in 1874, beginning with the Burgersponde, they have proven to be an outstanding store of value over their nearly 150-year history. Worth a face value of 1 ZAR in 1893, the “Een Pond” coin alone is worth more than R240 000 today.

The complete set being tokenised includes the 10 denominations of ZAR coins that were minted before the South African War (also referred to as the Second Anglo-Boer War) of 1899 and is worth an estimated R18-million.

The holders of the tokens will gain part ownership in the actual physical collection. This initiative comes at an ideal time with the global economy poised for recession and gold widely accepted as the safest alternative asset class in times of economic uncertainty. Numismatics (coins) made of precious metals have been around since the fifth century and have been a medium of exchange and representation of money ever since. Buyers of physical precious metals are motivated by the fact that gold and silver provide a safe store of value, are a currency hedge, combat inflationary concerns and can be moved around.

The ZAR coins were minted through the Berlin Mint of Germany in 1874. When Paul Kruger became president, he commissioned what is considered the first true ZAR circulation coins made of gold, silver and bronze. The coins were remarkably well preserved due to non-use during the subsequent war and are therefore in excellent condition and graded highly by the foremost grading company, Professional Coin Grading Service. The collection also includes the near-mythical 1892 “Red-Brown” Proof Penny, so-called for the unique colour produced by an incorrect mixture of copper when production was moved to Pretoria.

Our collaboration with Momint introduces an opportunity for a new wave of savvy digital natives to participate in fractional ownership of a priceless collectable numismatic treasure. Your grandparents might have scoured auctions for rare collectables, but now revolutionary technology is changing the souvenirs market. 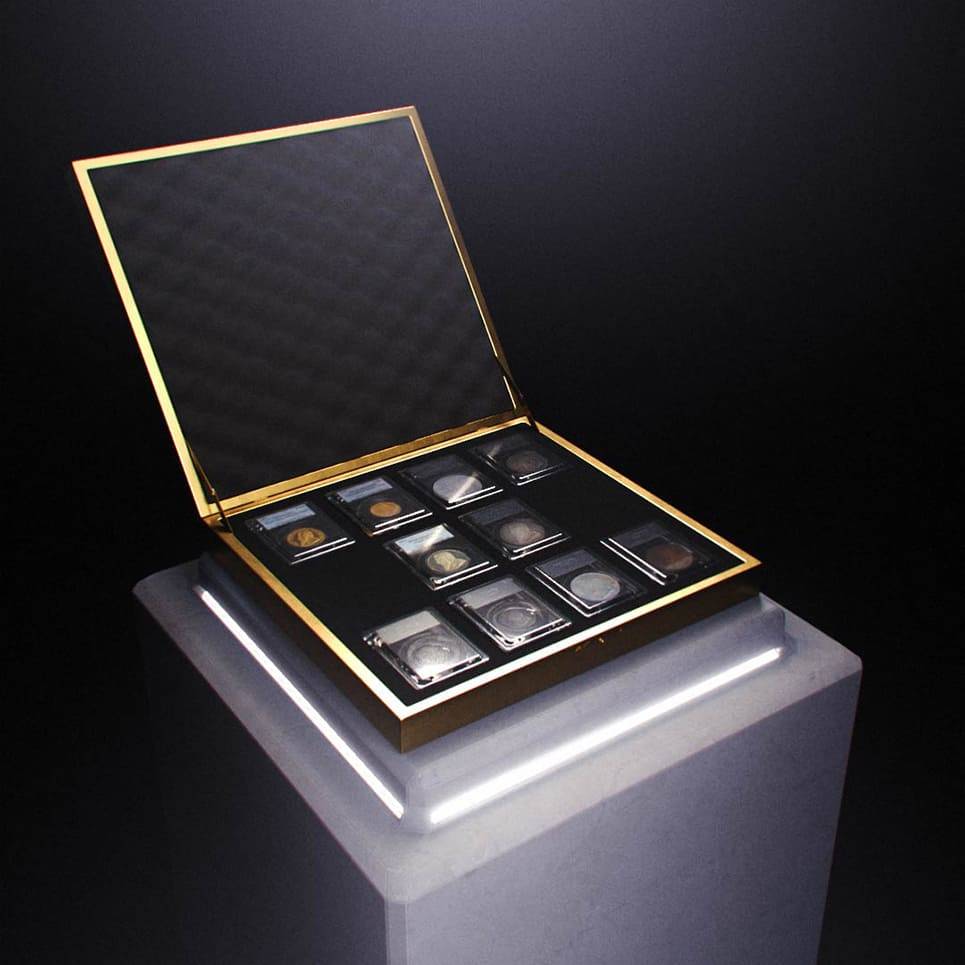