The World’s Most Valuable Coin Sells at Auction for $18.9 Million

That headline certainly caught our attention this week!

Sotheby’s New York auctioned off a collection of rare objects owned by luxury shoe designer Stuart Weitzman. This collection was known as the “Three Treasures” and included a gold coin, a set of misprinted stamps and a scrap of magenta paper popularly called “the world’s rarest stamp.” As much as we admire philatelists and stamps, we really love gold coins and collectables. Weitzman had an unbelievable gem in his collection, the only legally privately owned 1933 Double Eagle known to survive today. Read the full story behind this, the world’s most valuable coin here.

To get a feel for the coin market at local auctions, we spoke to Laurence Friedman, Group Manager at Stephan Welz & Co. Friedman says that many factors are having an impact on prices realised.

“Buyers and sellers should consider the condition of the coin, rarity and provenance. Uncirculated or mint coins hold a higher value than circulated coins. It is important to investigate the grading of a coin as this influences potential value”.

Looking at the 1933 Double Eagle that fetched that $18.9 Million price tag, the “rarity” factor was huge as it is the only one in the world! An absolute one of a kind! Rael Demby, CEO of The South African Gold Coin Exchange & The Scoin Shop, says a 1967 Krugerrand is an exciting example.

“A 1967 Krugerrand is highly collectable, due to the year it was minted. Back in 1967, a 1oz Bullion Kruger would have retailed for R27! ( Yes, really) Today, whether you choose to sell via an auction or through an established dealer, a 1967 Krugerrand could fetch a price north of R40 000.”

This example demonstrates that gold coins and collectables are a store of value. Step back for a bit of perspective, remember that 1967 is 54 years ago and The Beetles, The Who and The Doors were at the top of the charts. Demby adds “ If a collector started a collection all those years ago, patiently held the coins, today he would be singing all the way to the bank!” Collecting gold coins and numismatics is not a “get rich quick scheme” but rather a fascinating hobby leading to a legacy.

Krugerrands in all sizes have probably been the most enduring collectable coin for South Africans, and Friedman says, “Locally, ZAR coins that were minted during the Anglo-Boer War have always been in demand with collectors.” Demby adds that they have a selection of highly collectable ZAR’s available for the serious collector, with a six-coin 1892 Silver Proof Set being the most highly prized.

Weitzman is an avid collector, and he started collecting coins from the age of twelve. Once he caught the COLLECTOMANIA bug, he expanded into other categories, including stamps. Weitzman also has a 300 pair collection of antique shoes. When asked about this, he blamed his wife and said “ It was my wife’s doing! I thank her every day, 300 times, for the pairs we’ve accumulated. She would buy me a tie or a shirt for gifts, which half the time I returned. She didn’t know what to get me. So one year, she bought me a pair of antique shoes. I said, “Wow! That’s fabulous!” On every occasion, she bought another pair of shoes; at auctions, flea markets, wherever she saw something beautiful.”

We pushed Friedman for some advice for those, like Weitzman, who are interested in collecting as a hobby. He said that

“The principles of collecting would apply to any category, whether it’s art, coins, stamps, or furniture. Educate yourself about the items you want to collect, watch auction records, talk to other collectors and dealers and read as much as you can. Seek out quality and buy the best you can afford.”

So, like with most things in life, doing some research and getting a broad understanding is a solid approach. “ Yes, Beware of fakes as there will always be some in the market, if it sounds too good to be true it probably is,” adds Friedman. Our Executive Chair, Alan Demby, was interviewed by Bruce Whitfield on Radio702 and said, “We do not believe that fake Krugerrands are endemic, but we know “ if it's too good to be true, it generally is.” Two experts can’t be wrong. Caveat Emptor is the motto to adopt.

As the leading gold coin and medallion dealer in South Africa, with close to 50-years of experience, it is safe to say that we are enthusiastic numismatic collectors, and appreciate all types of collecting. Friedman endorses our view that collecting is not about making money but “should be about pursuing a passion; if it turns out to make some money that should be a bonus.” 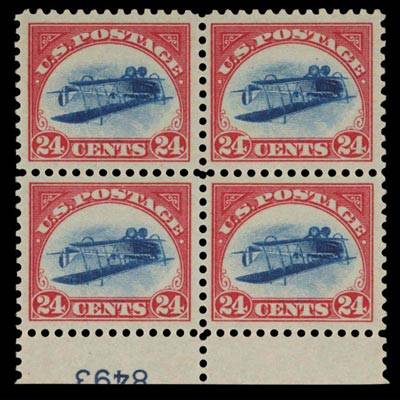 A printing error causes the planes to appear upside down on 100 of these 1918 airmail stamps. Credit: Sotheby's